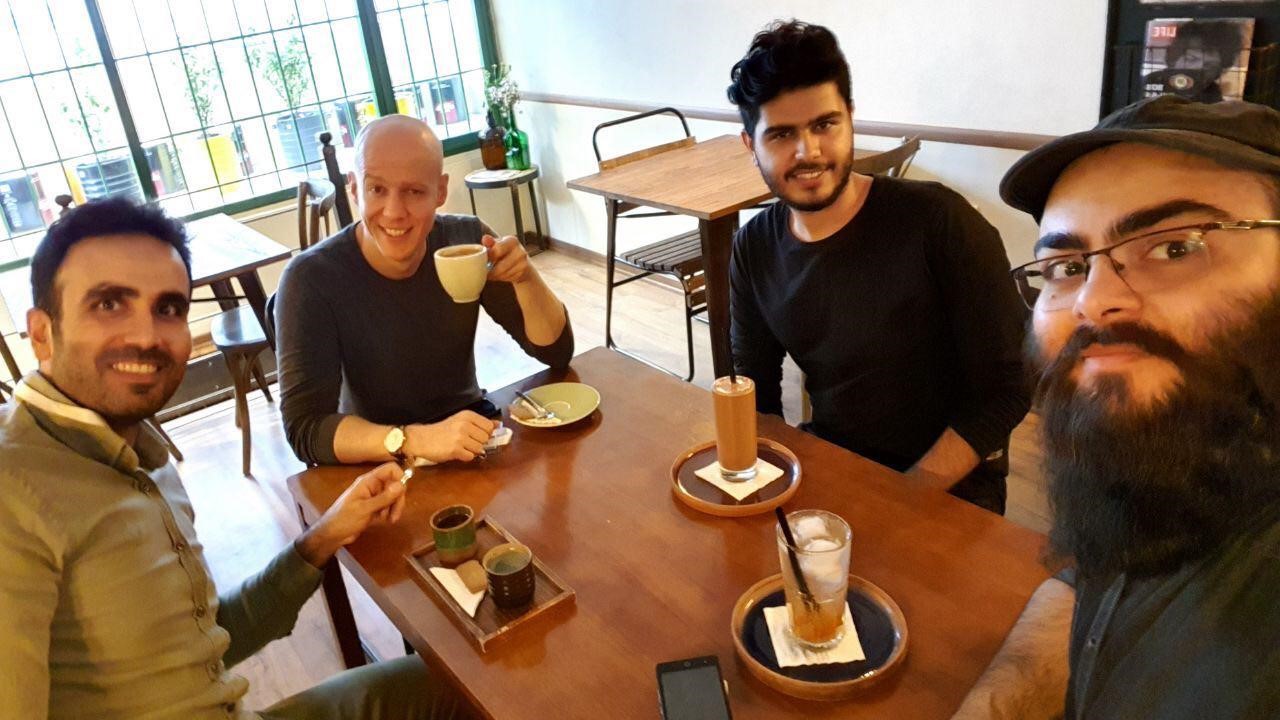 A friendly talk with the Operations Manager of Zcoin about the Project and his trip to Iran!

When I was attending an event about Blockchain technology, I suddenly noticed that somebody who looked like he just got off the plane, walked into the room. Later on, he was introduced to me as the Operations Manager of the Zcoin project – Sebastian Mack. “What are you doing here in Iran” I said to him, he said he was on holiday but when he realized there was a Blockchain conference, he wanted to visit. The visit was organized by Hamed Salehi of Iran Rescue Bit movement in which Zcoin is the altcoin with the highest donation volume (Iran Rescue Bit is a platform to help people who suffered from natural disasters by cryptocurrencies).

I was shocked when I heard some Persian words from Sebastian, I asked him: “do you know Persian?!” – “a little bit, but I am trying to learn more” he said. The next time I saw him, I asked him whether he likes to have an interview with CoinIran or not which he didn’t hesitate to say “yes”, and mentioned it could help the adoption of Zcoin in Iran. We couldn’t manage the interview while he was in Iran but we did it later when he was back in Germany. This is my interview with Sebastian:

Hello Sebastian, how are you today?

Good! Thanks so much for inviting me to do this interview. Getting settled into my German life again here but still processing impressions from my trip to Iran.

How was your trip to Iran? Fantastic! It was my third trip to Iran and it’s interesting to see how my perspective changed. On my first visit, I took trips to different cities across Iran, visited touristic sites and so on but this time I decided to make it more about people. How do you learn about a country? Yes, you can go to the museums, look at statues, see the sites… and these are important things, especially given Iran’s rich history. But most importantly I think you need to be in touch with the people to really understand what a place is about.

OK, let’s get to the Zcoin project! What is Zcoin? Why do we need another coin at all?

Oh, I can talk about this forever but to make it short: Zcoin is a privacy coin. Our focus is on private transactions and our goal is to be a coin that is used for private everyday payments. We admire the genius of Satoshi Nakamoto and look up to Bitcoin but we feel Bitcoin’s lack of privacy is a serious problem. If the goal was to make “peer-to-peer electronic cash” but – unlike cash – every coin can be traced back to its origin, then it’s not like cash in that respect. That’s the problem we’re trying to solve.

The question ” Why do we need another coin at all?” is a good one, in fact, one that isn’t asked often enough in my opinion. In this case, though the answer is clear: because everybody needs privacy and because we’re not like the other privacy coins.

Your focus in Zcoin is on privacy, why is it important?

We believe in privacy as a fundamental human right. Think about it: if you don’t have privacy, you cannot be the person you are or who you want to be. If you know you’re being watched, will you pick your nose or sing in the shower? Iranians know this all too well. Most people there behave very differently in private than they do in public places.

Now we’re not quite in the Truman show yet, but pretty damn close to Orwell. We live in a world where the trend is to go more and more cashless, metadata is collected not only by governments but also by private corporations that even sell this data. Recently, Facebook announced Libra which, I guess, for them is only the next logical step. After owning your pictures, likes, location, reactions to news stories, political affiliations, and even sexual orientation, now they’re going for your spending habits. This is a big deal. Show me what you spend your money on and I tell you who you are.

Absolutely. We’re a 100% proof of work coin. And before you ask: no premine.

Our mining algorithm is called MTP and is quite unique. In a nutshell, it’s an algorithm that achieves ASIC resistance by means of memory hardness. It sounds complicated but it just means that the algorithm is designed in such a way that the overall speed is dependent on memory bandwidth. The rationale behind this is that memory speed is hard to optimize with specialized computing equipment whereas the processing power can be significantly improved (which is the ASIC model). We actually have an article about MTP in Farsi on Virgool here.

Is Zcoin a fork of Zcash?

No, the people seem to think that we are – maybe because of the Z? I don’t know. The similarity that we have is that the anonymity protocol which we first used (Zerocoin) was made by some of the same people who created Zcash’s protocol (called Zerocash). Either way, we have now moved on to the Sigma Protocol.

What is the Sigma Protocol?

Sigma is our privacy protocol. It works by destroying a coin and then getting an entirely new coin in return.

So, for example in a Bitcoin transaction, you would see a transaction from A to B and looking at B, you can trace it back to A.

Note that this is not mixing! Mixing only hides your inputs in a crowd. The link is still there, just harder to find. This is inferior to zero-knowledge-proof-based anonymity schemes like Sigma which doesn’t just hide, but irreversibly removes the link between two transactions.

How old is the project?

Our founder Poramin Insom created Zcoin in 2016 when he was studying at Johns Hopkins University under Matthew Green, who was one of the researchers who created the Zerocoin protocol. Fun fact: he had previously founded Vertcoin but left the project when they were unwilling to implement privacy.

We actually just turned 3 in late September! This makes us one month older than Zcash by the way haha

Do you have the “set in stone” policy? Or in other words, is it decentralized? Or under the inﬂuence of a company?

To be honest, on an organizational level, we are more centralized than we would like to be.

We’re not a company, more like a loose collective of people working towards the same goal but if we stopped paying our team, our development would pretty much stop. We currently have 8 developers, 2 dedicated cryptography researchers, and 6 people working in operations, marketing and support.

For the most time in our existence, we have been a top 100 coin, which in a world of more than 3,000 coins, is quite an achievement and we are very proud of this. However, despite being relatively “famous”, we still cannot rely on outside contributions of enthusiastic developers to move our project forward. In an ideal world, we would like to have a coin that “runs itself” through a clever governance and funding model but in reality, this is one of the hardest things to implement.

I feel the scalability debate is largely irrelevant at this point. Where is the crypto adoption that warrants high TPS numbers? Which coin is getting any significant usage as a means of payment for microtransactions? Projects talk about high TPS numbers, make comparisons to the Visa or MasterCard networks… but does any of that matter at this point in time? In my opinion, no.

If you want numbers: Our block time is 5 minutes and our block size is 2MB so technically our TPS should be 4x those of Bitcoin. Our approach in the scaling debate is simple: wait and see. Once Bitcoin gets serious problems in that respect and a solution is found, we can just adopt the best solution that emerges. Crypto adoption as a whole really has to pick up by a lot before Zcoin will start running into scalability problems.

You are among the top 100 projects based on market cap which is good considering all these projects, what is your condition regarding the adoption of Zcoin by merchants and users?

We have just made huge inroads on adoption in Thailand where more than 5 million merchants now accept Zcoin for payments through the national QR code system called PromptPay. To be fair this isn’t 100% crypto adoption because payments are instantly converted into fiat for the merchants but it seems the world isn’t quite ready for that so given these circumstances, it’s a huge achievement for us.

Other than that, Zcoin was used in the world’s biggest blockchain-based election, also in Thailand. More than 127,000 votes were cast on the Zcoin blockchain in the primary election of the Thai Democrat Party in November last year and we have proven that our blockchain is ready for some action!

Other than that, we are constantly looking to add new partnerships. For example, I have made all my hotel bookings in Teheran via our partner Travala.com and paid with Zcoin!

How about Zcoin’s Roadmap? Where is it headed?

Great question. There has never been a time in which we did more development! Our immediate short-term goals are BIP47 payment codes, BIP39 seed phrases (including Sigma which isn’t easy) and the release of our new wallet which is a lot more beautiful.

Mid-term we will release a mobile wallet with full Sigma functionality, upgrade our Bitcoin Core codebase to 0.17 and implement our new privacy protocol called Lelantus. We are very proud of this because it has been developed by our own cryptographer Aram Jivanyan and both Monero and Beam are currently researching ways to implement it in their own protocols.

All of the above are in the implementation phase.

Long-term we are looking into governance models to maybe replace our dev fee model of funding and involve the community into our development. We are in close contact with our community and respect their feedback in our development process but we would like to do it in a more structured way. Like I said above this is easier said than done but we hope to have a solution in Q3 2020.

Do you have any plans to expand the Zcoin community in Iran?

Absolutely! But I would like to do it in an organic way. Everyone can run online advertising campaigns or pay off a couple of influencers and have them sing the Zcoin song. I would rather develop personal relationships and teach people about privacy and our technology because that’s what we do best. I’m also happy that this gives me yet another reason to come back to Iran so see you soon!

Always a pleasure to see you!

It was nice talking to you Sebastian, and I wish all the best for you and the Zcoin project!